Common scab: Tackling a “problem with no solutions”

Research towards common scab management that is targeted to field-specific conditions. 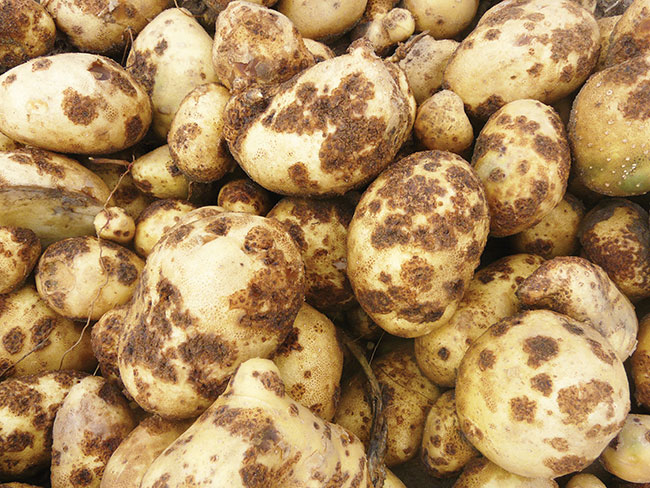 The biggest challenge in managing common scab is that all the control measures produce inconsistent results: they work in some fields but not in others. So Eugenia Banks, potato consultant for the Ontario Potato Board, has conducted a two-year project that makes progress on a field-specific approach to scab management for Ontario conditions.

“Common scab is the most important soil-borne disease of potatoes in Ontario and across Canada,” Banks says. “Scab does not reduce yield, but the corky, superficial or pitted lesions that develop on infected tubers render the potatoes unmarketable.”

Banks is very aware that developing more consistent scab control methods is an uphill battle for researchers. “Back in 2007, I organized the first International Common Scab Conference in North America. Speakers from all over the world provided information on their ongoing research projects to control common scab. But 12 years after the conference, we have not made much progress. Common scab remains a problem with no solutions.”

One key advantage these days is that advances in molecular technologies are making identification of the different species of scab-causing bacteria much easier and faster. Streptomyces scabies is considered to be the main species causing scab worldwide, but it is not the only Streptomyces species that can cause the disease.

One of the objectives of her project was to identify which Streptomyces species is causing common scab in Ontario potato fields. The project also examined whether the scab species in a field is correlated with the field’s soil properties and evaluated the performance of a biocontrol agent for managing scab.

In the project’s first year, Banks collected soil samples from 50 potato fields in different parts of Ontario, to survey the Streptomyces species and assess soil fertility.

“For many years, Streptomyces scabies was assumed to be the prevalent common scab species in Ontario. We suspected that other species were also present, but which ones? When fighting common scab, you need to know the enemy to try to win the battle.”

Their tests found that 48 of the 50 Ontario fields were infested with common scab. Of the two non-infested fields, one was located near Alliston and the other near Sudbury.

Most of the infested fields had more than one of these four species.

Banks emphasizes, “The fact that Streptomyces stelliscabiei is the predominant species in Ontario – and not Streptomyces scabies as expected – is a major breakthrough result. It could lead to development of practices that specifically target this species.”

The molecular testing also detected the presence of a toxin called thaxtomin in nearly all of the soil samples. This plant toxin is produced only by pathogenic species of Streptomyces and causes the development of common scab lesions.

The results of the soil nutrient analyses were also very interesting. “The levels of micro- and macro-nutrients varied enormously. Soil pH, per cent base saturation of hydrogen, and the potassium-to-magnesium ratio were found to be the most important factors correlating to levels of common scab in Ontario potato fields,” she says.

“These findings will help to develop a strategy to reduce the incidence of common scab in Ontario.”

She also notes, “Streptomyces stelliscabiei appeared to be suppressed by [higher levels of] organic matter in the soil, but this effect was not noticed with Streptomyces scabies.”

In the project’s second year, Banks assessed the effectiveness of a strain of the bacterium Pseudomonas synxantha as a biocontrol agent for managing common scab.

This strain, called LBUM223, was found in a New Brunswick field by research scientist Martin Filion. In his research at the Université de Moncton and now at Agriculture and Agri-Food Canada (AAFC), Filion has been investigating various microbial strains as control measures for common scab. LBUM223 is one of the most promising candidates he has found so far.

“LBUM223 has reduced common scab symptoms in research trials in Prince Edward Island and New Brunswick,” Banks says. Her 2019 study was the first evaluation of LBUM223 under Ontario conditions.

She assessed LBUM223 in a research plot embedded in a commercial potato field with sandy soil near Alliston. The predominant common scab species in the plot was identified as Streptomyces stelliscabiei. The trial involved Yukon Gold, a potato variety that is highly susceptible to the disease.

The predominant common scab species in the plot was identified as Streptomyces stelliscabiei. The trial involved Yukon Gold, a potato variety that is highly susceptible to the disease.

For this trial, Filion provided a pure culture of LBUM223. The inoculum was prepared by Afsaneh Sedaghatkish, a PhD student of University of Guelph professor Mary Ruth McDonald. McDonald carried out the statistical analysis of the field data.

At harvest, Banks measured tuber yields and determined the incidence of tubers with common scab lesions and the percentage of the tuber surface with scab lesions.

The tuber yields and the incidence of tubers with lesions were not statistically different among treatments. However, the treatment did make a significant difference to the percentage of the tuber surface with scab lesions. Tubers from Treatment 3 had the least surface area with scab lesions.

“The results are promising. A reduction in tuber surface infection is a first step in combatting common scab,” she says. 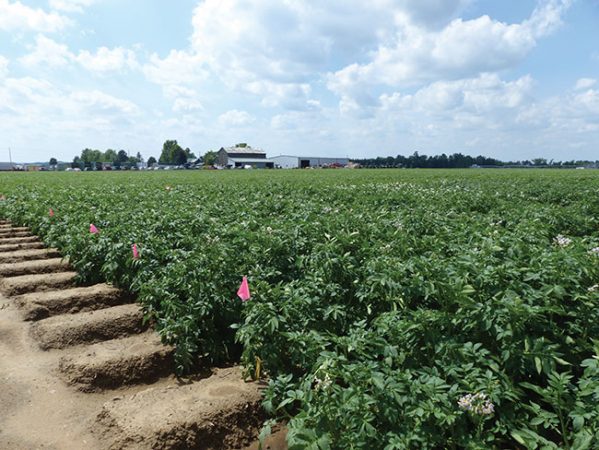 In a 2019 trial, Banks assessed the effectiveness of a bacterial strain called LBUM223 as a biocontrol agent for managing common scab.

Research towards field-specific scab management is also taking place in other parts of Canada. For example, AAFC’s Claudia Goyer is the lead investigator of a Canada-wide common scab project that includes an examination of the genetic diversity of Streptomyces species and strains in potato-growing regions across the country. Filion, who is one of the collaborators on Goyer’s project, says that the project’s genetic studies are underway in P.E.I., New Brunswick, Manitoba and some Ontario fields. He notes, “So far, we have discovered more than 10 different genetic groups of scab-causing Streptomyces. Some are clearly more virulent than others.”

Filion, who is one of the collaborators on Goyer’s project, says that the project’s genetic studies are underway in P.E.I., New Brunswick, Manitoba and some Ontario fields.

What can potato growers do right now to manage common scab? “In healthy fields, make sure you plant healthy seed. Once the common scab bacterium is introduced into a clean field, it will not go away. It will stay there forever. Picking seed tuber samples at random and washing them should give a good indication whether common scab is a problem or not,” Banks says.

“At present, resistant varieties are the most reliable control method. For example, the early fresh market variety Superior was released 68 years ago with a common scab resistance trait that is still holding. Some Superior tubers may show scab lesions in heavily infested fields but at a very low percentage (one to two per cent).

“Also, pay attention to the ratio of potassium to magnesium and the manganese level in your soil. A potassium-to-magnesium ratio between 0.3 and 0.4 tends to have the lowest common scab severity. And soils with higher levels of manganese have lower scab severity.”

“Also, pay attention to the ratio of potassium to magnesium and the manganese level in your soil. A potassium-to-magnesium ratio between 0.3 and 0.4 tends to have the lowest common scab severity.”

And her final tip is: “Be a researcher. Embed a research plot in a field with common scab and try any method you have heard about or think might reduce scab.”