Exploring the idea of “cover crop juice” as an on-farm source of nitrogen to boost fertility in high-intensity vegetable production. 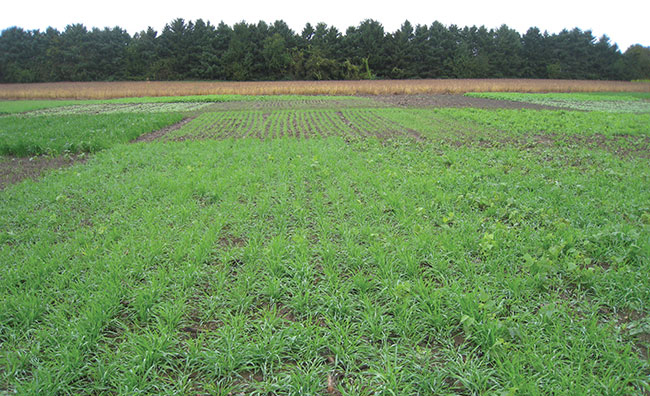 Cover cropping can have many benefits in high-intensity vegetable production systems, from soil and water conservation to pest control via bio-fumigation and weed suppression.

But just because the benefits are well understood doesn’t make the practice a given.

“We’ve known for at least 30 years that cover cropping is a best management practice in high value vegetable systems, but that didn’t increase cover cropping much in the Salinas Valley,” says Eric Brennan, a research horticulturalist with the United States Department of Agriculture’s (USDA) Agricultural Research Service in California.

The vast majority of cropland that could be cover cropped in the winter is left fallow in the region, he says, primarily so farmers can get onto clean fields for early planting.

But opportunity for cover cropping is ripe, he says: the nutrients on those fields that otherwise end up lost to the environment could be scavenged by cover crops in the winter to mitigate leaching and pad producers’ pocketbooks.

According to Laura Van Eerd, professor of sustainable soil management at the University of Guelph Ridgetown Campus, it can be hard to find good numbers on cover crop adoption among Ontario’s commercial vegetable producers, but the practice is becoming “more common than it was a decade ago,” she says.

In Ontario, producers use cover crops for many different reasons, from mitigating soil erosion to boosting soil organic carbon.

But Van Eerd says not enough is understood about the economic benefits of planting cover crops in high-intensity vegetable systems.

The study was set up in a randomized complete block design with four replications. Cover crops were seeded in August for the early seeding dates and September for late seeding dates.

Samples of cover crop aboveground biomass were collected prior to cover crop termination, along with soil samples so soil mineral N could be quantified.

In the study, Van Eerd showed that yield benefits were variable year-to-year, but averaged over four years she saw a seven to 10 per cent yield increase for snap beans and sweet corn.

In another long-term cover crop experiment, Van Eerd’s PhD candidate Inderjot Chahal showed improvements in soil health and sequestration of soil organic carbon. Van Eerd is working with economist Richard Vyn and masters student Dani Mayer to compare the costs associated with cover crops, including seed, custom planting and herbicide application, with the revenue generated by selling the commodity. This team is working out how, if farmers could be paid for carbon sequestration, practices such as cover cropping could further improve profit margins.

This team is working out how, if farmers could be paid for carbon sequestration, practices such as cover cropping could further improve profit margins.

“Our preliminary results are that in a vegetable system you have positive profit margin with cover cropping,” Van Eerd says. “You’re making more money with than without.” 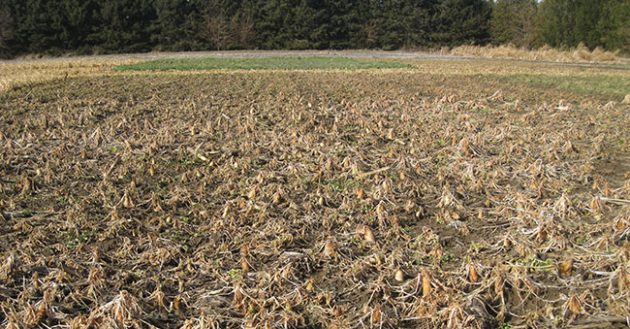 Last winter, Brennan presented his findings on a unique cover cropping experiment at the Ontario Fruit and Vegetable Convention.

Brennan calls his idea “SHARPR cover cropping.” First, the farmer grows a cover crop such as mustard until it reaches about half its maximum biomass and has used most of the soil’s residual nitrogen. At that point, the shoots are removed from the field with a forage harvester, leaving the field ready for planting with minimal residue problems.

Then, the harvested residue is run through a screw press. The cover crop fibre and juice are both stored on the farm and can be reapplied as needed and when it’s convenient for the farmer.

The mustard cover crop in his experiment, said Brennan in the presentation, contained at harvest about 80 to 90 per cent moisture and a fairly low carbon to nitrogen ratio (12). After it was macerated, about 50 to 60 per cent of the weight of the crop was in the juice and the rest in the fibre, which now had a carbon to nitrogen ratio of about 27.

On-farm, the fibre could be stored in silage bags and used as compost, Brennan explained. The juice, which contains about 50 per cent of the mustard’s nitrogen, potassium and phosphorus, could be used on adjacent fields as a fertilizer replacement. Compared with commercial inorganic liquid fertilizer, cover crop juice contains only about a third of the N, but it’s produced on-farm from ingredients which would otherwise have been wasted, he says.

The juice, which contains about 50 per cent of the mustard’s nitrogen, potassium and phosphorus, could be used on adjacent fields as a fertilizer replacement.

Brennan says the economic value of the juice outweighs the cost associated with growing and harvesting the mustard, although the cost of “juicing” the crop as well as storing the juice and fibre would also have to be factored in. Brennan says dairy farms already use forage harvesters and screw presses (to squeeze liquid from manure) and this equipment could be used on a custom basis.

Brennan is still in the greenhouse phase of his studies on the juicing system but hopes to move it up to field-scale soon. He says there are a lot of big questions to answer on the economics of the system, but there’s potential for it to be used in organic systems, which already pay a premium for organic inputs.

A video presentation explaining Eric Brennan’s work on cover crop juice can be found on YouTube:

Van Eerd says her research underscores the value of below-ground biomass and even if above-ground cover crops are removed for grazing or juicing, a large portion of the value of the cover crops remains in the field.

She agrees that the juicing system might have most value on organic operations in Ontario, where nitrogen available to the crop is often limiting.

“For me, from a soils perspective, anytime you can get plants growing on your land that is a win. It’s a win for your soil health and building soil organic matter. I think juicing cover crops is an interesting concept and definitely worth exploring,” she says. “Farmers can innovate and find ways to overcome obstacles given the need and the desire.”

“For me, from a soils perspective, anytime you can get plants growing on your land that is a win.”

Dave Van Segbrook, a producer in Kent County, has experimented with a range of cover crops on his operation, where he grows sweet corn, peas, snap beans or green beans, peppers, Brussels sprouts and sugar beets.

“We’ve used red clover, buckwheat, oilseed radish and oats, and we’ve used winter wheat. We got into trouble that year because we had a wet spring, but we made it work,” he says.

Van Segbrook gravitates toward cover crops that are winter-killed for ease of use, he says, although his main considerations for cover crops are what he’s growing the next year and whether he can get the cover crop established this year.

Van Segbrook uses cover crops for many reasons on his operation—to improve soil organic matter and soil structure, to boost yield in subsequent crops, to mitigate compaction and even to draw Canada geese away from his high-value processing vegetables.