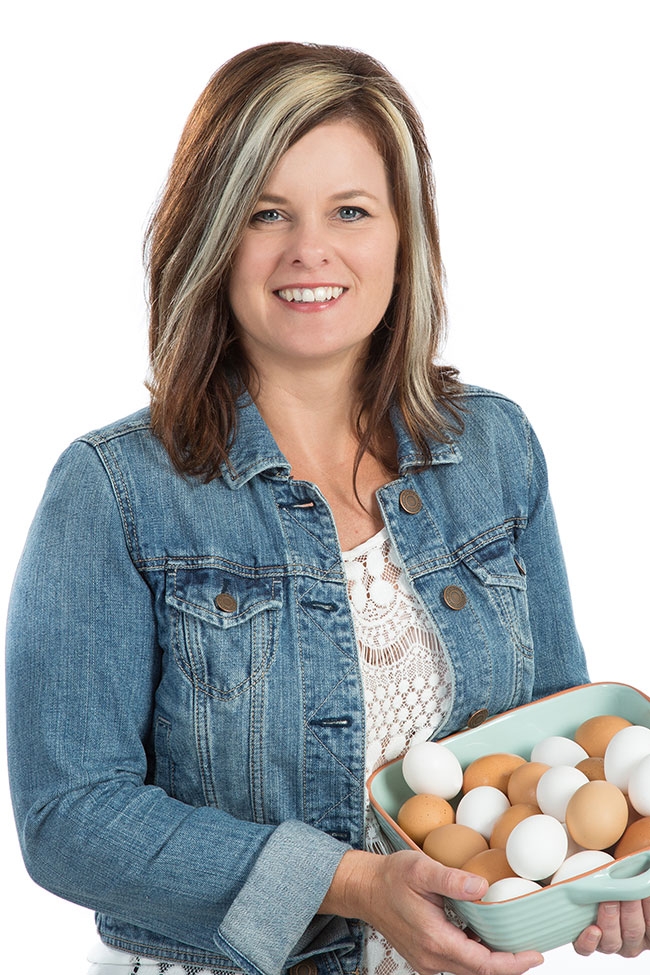 Passion, relevant experience, commitment, dedication and time – these are just a few of the qualities that successful boards look for in their directors. When it recruited egg and pullet farmer Catherine Kroeker-Klassen, Manitoba Egg Farmers was rewarded with all of these qualities and more. She is the first woman to join the board and in March was elected vice-chair.

A strong advocate for the industry, she hopes her position will help her to improve the industry for producers and consumers alike.

Kroeker-Klassen is a fourth-generation egg farmer who grew up on her parents’ farm in rural Manitoba. She left for the city after high school and returned in 2002 when her father asked if she wanted to keep the farm’s books part time. Back then, she had two young children at home, so the part-time role fit her schedule well.

Gradually, she took on a bigger role on the farm, eventually looking to her brother, James Kroeker, as a potential partner. “We both recognized that we had certain skills and character traits that complemented each other,” she says. “When we approached mom and dad, they were quite happy to have another generation step in.”

In 2008, the siblings began to expand the family farm. “Up until that point it had been just one family, but now we were looking at supporting two or three families on one farm,” Kroeker-Klassen explains. Together, they bought more quota – both layer and pullet – and actively sought out more land to rent or buy. Eventually, the siblings took over the farm and their father took on the role of company president.

Today, the pair raise 16,600 laying hens and 34,000 pullets, and crop 1,400 acres of corn, soybeans, canola and wheat near Landmark, Man., which sits 30 minutes southeast of Winnipeg. The layers and the pullets are raised in conventional barns with the hens producing white omega-3 eggs for the Omega program.

On the farm, the duo is responsible for the day-to-day chores. Kroeker-Klassen’s husband, Ed Klassen, works for the Manitoba government, which takes him off farm and into the city of Winnipeg.

The couple has two children, daughter Talia and son Adam. Talia and her husband, Jeremy, have an egg farm as well. Jeremy was one of the Manitoba new entrants winners, an award that gave the couple 6,000-layer quota. They’ve been in production for just over a year now.

Adam is still in high school. He spends a lot of time on the farm and has a lot of mechanical skill, his mother says. Although he talks about one day farming as well, he has plans to take a welding program in the fall.

As most producers will attest to, working with family on a daily basis can sometimes be tough, and farming is often isolating. Occasionally, time off the farm rejuvenates the spirit and offers a fresh perspective, which is why when it was first suggested that Kroeker-Klassen would be a great fit as director on the Manitoba Egg Farmers board she strongly considered it. But, when the idea first came up, she admits that she was not ready. “At the time, discussion here on the farm was that it wasn’t the right time – that I was still too hands-on involved in everything that was going on with the farm,” she says.

A year later, another opening came up on the board, a shorter, one-year term. Although the timing still wasn’t perfect, the board’s requirements were reasonable enough that she felt she could take on the role. “My husband was probably my biggest encourager to pursue something outside of the farm,” Kroeker-Klassen says. “In his words, he thought I was kind of stagnating a bit and not using some of the skills that I had gained from my other career choices and other jobs that I had had.”

Those accomplishments include administrative skills gained through work at one of Winnipeg’s largest hospitals, and the social finesse that comes with working as a real estate agent. “I guess he thought that I should probably try to branch out a little bit,” she continues. “A farm can be isolating. He was a good encourager on that.”

It turned out he was right, as Kroeker-Klassen found she enjoyed working on the board. Since then, she has taken on an even more active role. In March, she was elected vice-chair of Manitoba Egg Farmers with the idea that she could possibly fill the role of chair in the future.

“We work very much for Manitoba’s egg farmers, as far as developing policies and procedures to ensure that our Manitoba egg and pullet farmers are kept up to date with changing markets and consumer trends, and making sure that we are staying at the forefront of that,” she says.

Those who serve on the board must be active farmers. “Because we are all active farmers the decisions we make impact us as well,” she said. “I think that’s important.”

Manitoba Egg Farmers also promotes eggs and agriculture to the general public through events like the Royal Manitoba Winter Fair in Brandon, Touch the Farm at the Red River Ex in Winnipeg and Agriculture in the Classroom throughout the province. “All of these are places where we can actually talk to the general public and consumers about eggs and how eggs are produced in Manitoba and Canada, and put a face to farming,” Kroeker-Klassen says.

“I find that very rewarding to be able to have a conversation with somebody and show them how farming is done,” she continued. “If we can open people’s eyes to that, that’s a win in my books.”

As the only woman on the board, Kroeker-Klassen brings with her a unique perspective. Her earlier, off-farm employment also comes in handy, as it enables her to see a bigger picture – one that includes both producers and consumers. It also helps that she is an active farmer at the forefront of the farm operation. “I guess I would be in a unique position in that my husband has nothing to do with the farm,” she adds. “It’s my thing. It’s my job, my career.”

As someone who is goal driven, Kroeker-Klassen finds her role on the board to be deeply fulfilling. “To be able to sit in a room where we can brainstorm and plan together and see a plan executed – for me, there’s huge satisfaction in that,” she says.

Keeping in line with her personality, she has also set goals that she’d like to accomplish while on the Manitoba Egg Farmers board. “I would very much like to see a national pullet agency,” she said. “Being both an egg producer and a pullet producer, I just see so much value in having a regulated agency for pullets.”

Perhaps her most important goal, though, is to make the industry as good as it can be. “Not just for farmers, but for all of Canada,” Kroeker-Klassen says. “We need to protect our food supply and anything I can do to help that along, I want to try and do that.”

“I like being a farmer and knowing that we’re providing safe, nutritious and economical food products, and I want to protect that for the whole country because I think it’s important for everybody,” she concludes.