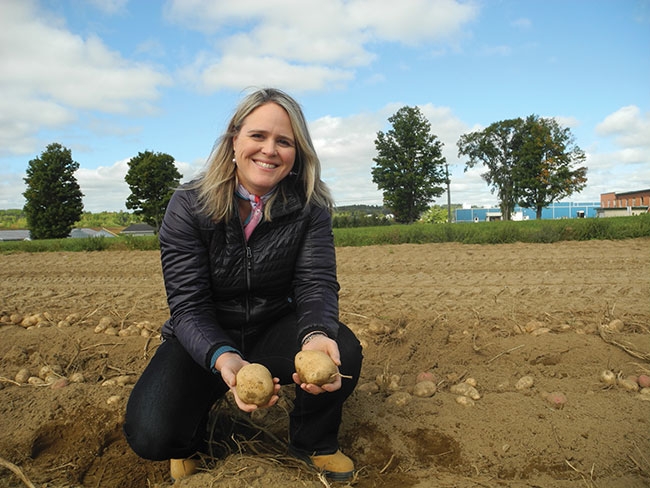 But researchers are making headway against bacterial diseases such as common scab, largely in the area of biological controls.

Common scab, a cosmetic disease that is usually caused by the bacterium Streptomyces scabies, impacts growers worldwide. Except in extreme cases, common scab doesn’t result in lost yield. Instead, it causes brown lesions on the tuber’s surface that impact salability. If more than five per cent of a tuber’s surface is affected, potatoes can’t be sold to the table market; the lesions also make tubers difficult to peel, resulting in waste and lost profits when potatoes are sold to the chip and fry markets.

In Canada, the disease is responsible for at least $17 million in lost revenues annually, particularly on the East Coast, whose rain-fed soils offer the right conditions for the disease.

“Irrigation is one way you can decrease common scab because the disease likes soil conditions to be really dry,” says Claudia Goyer, a molecular bacteriologist with Agriculture and Agri-Food Canada in Fredericton.

“When it’s really wet, mobile bacteria will colonize the tuber faster, but when it’s dry, the mobile bacteria don’t have an advantage and Streptomyces scabies can get in the lenticels of the tubers,” she says.

In other words, it’s a complicated disease – but Goyer’s team is tackling it from several angles, attempting to understand how common scab works in order to build effective controls.

In early 2018, Goyer’s team published a paper offering conclusions on a study that ran from 2013 to 2014 looking at factors that influence common scab pathogens in the soil – how the pathogen populations change between the rhizosphere and the surface of the tuber over time on two susceptible (Green Mountain, Agria) and two resistant (Gold Rush, Hindenburg) cultivars.

“What we saw was that some of the susceptible cultivars were harbouring a greater number of the pathogens overall compared to the resistant cultivars,” Goyer says.

Goyer believes the different varieties have different root exudates, or exuded different substances from the root, and the quantity and composition of the exudates differs between varieties, attracting different pathogen communities in the soil microbiome.

What this means is that the cultivars themselves influence common scab pathogen growth conditions. It also means producers planting susceptible varieties are perpetuating a common scab problem in the soil over the long-term.

“At the end of the field season when the tubers are harvested, the roots are left behind, which means that susceptible cultivars leave five to 10 times more pathogens that cause common scab in the fields, compared to tolerant cultivars,” she explains. 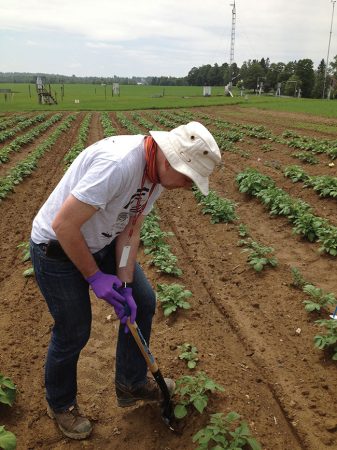 Goyer has another project examining the use of somaclonal variation, the plant’s natural ability to change its tissue culture, to increase resistance to common scab in common potato varieties Shepody and Red Pontiac.

Somaclonal variations use the natural ability of a plant to change under stress. Somaclonal variation can rapidly introduce genetic variability using tissue culture, including random mutations in target plant species, creating genetic variants. These lines are then screened using a toxin from the target pathogen to find variants with enhanced resistance. Two years ago, Goyer’s team planted out 50 variants each from Shepody and Red Pontiac, and found about 10 variants with improved resistance to common scab.

“We then took those variants and multiplied them and planted them in 2018 to see whether the effect held,” Goyer says. “We’re still crunching the numbers, but some of the variants are showing promising results.

Currently, says Goyer, producers have very few chemical options to control common scab. The best controls available to producers come down to management: producers are advised to use clean seed and to avoid letting soils reach a pH above 5.4, because the pathogen prefers soil with more neutral pH.

In summer 2019, Goyer plans to start a new project in Manitoba and Prince Edward Island looking at which management practices are effective in controlling common scab.

“We’ll be looking at the effects of agricultural practices in these two provinces to understand the mechanism, why some agricultural practices work to reduce common scab and some do not,” she says. The project will take into account environmental and soil factors – including rainfall, temperature and soil physico-chemical properties – as well as management practices.