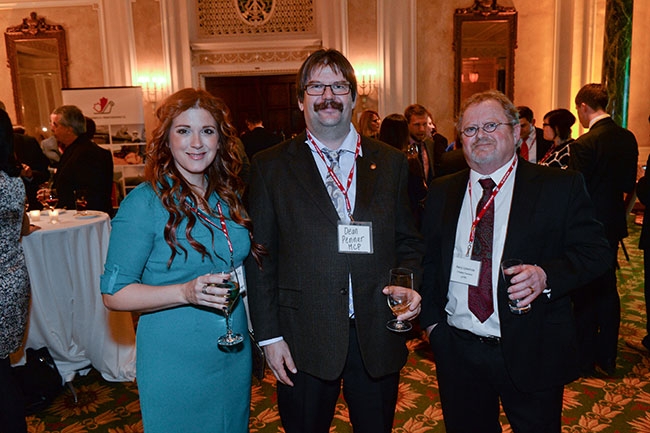 Although Stephanie Nelson puts in long hours every day in a boardroom, this farm girl will always be most comfortable in jeans and boots, talking broiler breeder production with farmers.

“I often say my farmers are the perfect combination of farmer and scientist. They are passionate about their work and that’s contagious. It’s hard not to feel really strongly about what they do. That’s why I love being part of this industry,” she says.

Nelson grew up on a broiler breeding farm and understands firsthand the work involved in managing a successful poultry business. Five years into her role as executive director with the B.C. Broiler Hatching Egg Commission (BCBHEC), Nelson has successfully navigated her poultry sector through a gamut of operational and management challenges.

She became acting general manager of the BCBHEC in 2012, general manager in 2013 and, quickly thereafter, executive director. On the operational side, she: oversees BCBHEC’s animal care, biosecurity and food safety programs; manages the commission’s on-farm inspection staff; and directs the production department’s allocations efforts.

Though that alone would keep her running, she also masterminds BCBHEC’s political and planning efforts, working with industry and government on everything from advocacy to emergency response to sector collaboration. “That sounds like a really short list,” she says without a trace of irony. “I must be forgetting something?”

Building Relationships
Rather than summing up her job as a series of to-do lists tasks, she prefers to think of her role as an overall attitude. “I consider myself an Ag advocate. I think what farmers do is miraculous,” she says. “I wish more people had a real idea of what farmers do. That’s where I mesh well with farming, because I’m passionate about sharing those messages and doing what I can to support the industry.”

A decade ago, she started with the BCBHEC as an auditor and then added in some hatchery inspection as well. To maintain her certification, she still does four audits each year. She admits that these audits tend to take three times as long as they really need to, given the chatting and catching up she does with the farmers.

“When you are in smaller sector like mine, you get to know people. It makes it really easy to enjoy your job when the farmers are saying ‘Come check this new technology out,’ or ‘Come see what I’ve built since the last time you were here!’ when you go to their farm.”

Nelson has also played an integral role in establishing the B.C. Poultry Conference, an annual, two-day meeting and sharing of the Four Feathers (the B.C. Broiler Hatching Egg Producers’ Association, the B.C. Chicken Growers’ Association, the B.C. Egg Marketing Board, and the B.C. Turkey Association). Planning is already underway for the fourth annual conference next March, which will once again include each commodity’s AGM along with a trade show, education sessions and an industry gala.

Nelson believes strongly in the need for agriculture to share its story openly and effectively. “The industry has changed but that change isn’t a negative. Producers are very innovative. They are working towards keeping up with the times. It wasn’t until recently that producers realized people care. But now that they know consumers are more interested in what happens on farms, producers want to be more transparent,” she says.

Getting started with sharing your story doesn’t have to be an impossible hurdle, she adds. “Just ask yourself: Who in your circle of influence can you educate? People want to know more. If I’m at a party, I can’t believe how fast word spreads that I work in poultry. People have so many questions. Do you have a social media platform? Do you have a website? Do you have amazing pictures of yourself doing what you consider to be your day-to-day life but others may never have seen? It’s just about sharing what you do. And feel free to lean on people like myself who want to support you in that.”

Sometimes low tech ways of sharing can have the biggest impact. Nelson is very active in her community including volunteering with the Poultry in Motion program, a mobile, mini-replica chicken barn that travels to fairs and schools to showcase broiler production.

“Manning the (Poultry in Motion) trailer at the PNE (Pacific National Exhibition in Vancouver) is one of the most eye-opening experiences. It’s not like I only interact in ag circles but even I am surprised by some of the myths and misinformation out there about agriculture,” she says. “So many people do not even know a farmer. The people who will spend the most time to talk to me are interested, not critical.”

Nelson says, in her experience most people have no idea broiler breeding farms exist, assuming either that broiler eggs are fertilized in a lab or that they are laid fertile without help from a rooster. And, because many believe questionable husbandry standards from other countries apply in Canada, virtually all are surprised by the comfortable living conditions broilers are raised in.

“I’m not sure what they envision but it’s not a warm, bright, bio-secure barn with nest boxes for breeders to lay eggs in. When they see the chickens in their habitats, a lot are impressed with how much time, energy and resources go into it. What we always tell them is that happy animals produce. Stressed and sick animals don’t produce and that doesn’t do anyone any good,” says Nelson.

Given the many pressures impacting poultry production today, the industry needs strong, passionate, articulate and highly committed leaders. It has found all that and more in Nelson, says Clayton Botkin, industry specialist of poultry and regulated marketing with the B.C. Ministry of Agriculture’s Sector Development Branch.

“Stephanie represents all of the poultry sectors in the best possible way, engaging everyone fairly, respectfully and equally when facing large burdens, namely an ongoing supply chain challenge with Salmonella enteritidis, as well as forward planning with increasing demand for chicken.

“She is truly a genuine leader and is driven by her strong motivation for success which she shares with others, empowering them to be successful as well.”

Nelson often gets asked if she’s thought about the next step on her career path. “I really haven’t. I really enjoy what I do. There’s never been a time where I’ve thought things are getting boring. There is still so much more that I want to be able to do here. We’re just getting started.”

At the end of each long day in the office, Nelson only needs to think of the farmers she works with and for to put a little spring back in her step.

“Ag is a big deal for me. I really, really love it,” Nelson says. “I’m a workaholic by nature. I’m often (at the office) late. But compared to a farmer who invests 24-7 into their farm, the hours I put in aren’t even close. I definitely have a bit of reverence for farmers: I think they’re pretty great.”